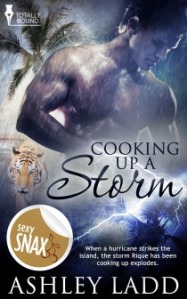 Brooks and Rique desperately want to win the head chef’s position offered by an eccentric millionaire Jonah Verleun on his beautiful, private but peculiar island that includes a zoo full of exotic animals, an amusement park and a monster shark tank beneath Jonah’s bedroom floor. While Brooks wants the job to escape his heartache and the lover who thwarted him, Rique is hiding from the mob, hoping to live long enough to pay them off with the prize winnings. Fierce competitors, they cook up a storm in a series of cooking challenges while trying to turn down the heat on their intense attraction. When a hurricane strikes the island, the storm Rique has been cooking up explodes, and no heart—or body—is safe.

I chose this because from the description, it looked like a fun, sexy read. I have to admit, I was a bit disappointed that it didn’t quite live up to its summary other than more or less following the plot as outlined.

The author almost lost me by page three when she set up the story with one of the main characters, Brooks, recalling how his ex-boyfriend cheated on him with a woman. While I understand that Brooks’ reaction is probably not unusual, I was not happy with her use of bisexual myths and hate language. Those would have been all right if she had in some way subverted the tired tropes, but she never bothered and in fact continued to play up the “my boyfriend turned out to be ‘straight'” thing for laughs without undermining the beliefs at all. I think the reader was supposed to just assume she wasn’t serious–unless, of course, she was (it was hard to tell).

Which brings me to my other disappointment. The whole story was so full of cliches and stereotypes and ridiculous things that I would have suspected satire if it weren’t for the fact that it didn’t read like any satire I’ve ever seen. I assume it was supposed to be funny, but instead, it was just kind of bothersome and distracting.

The actual plot (right up until the over-the-top ending) was actually pretty good, and I wish the author had done more with it. I loved the descriptions of the cooking challenges, and she did a nice job of building up to the steamy moments. Unfortunately, they were then ruined by being bland and not particularly sexy. It was annoying that in the first sex scene, one of the men kept distracting from the sex by thinking about unrelated things. It just wasn’t as hot as it could have been.

It’s obvious the author has a good grasp of the language and is highly creative. The story was polished and clearly well-edited. It had momentary flashes of brilliance, including the imaginative cooking challenges. But the other elements were too much for me to really lose myself in the story and enjoy it.