Being a Sheriff’s Deputy is not all about saving lives and arresting criminals, and each day Grace wonders if she’ll make it home.

While kids at the schools Deputy Grace Halling visits see her as the knight in blue-cotton armor, people involved in the cases she is dispatched to have a different opinion. She has every confidence in her ability to do her job and arrest criminals. She easily takes down a knife-wielding woman and a drunken combatant teenager without hesitation. Everyone—victim, suspect, or witness—has a story to tell or to lie about, and Grace is never perturbed by their tales.

That all changes when she looks down the barrel of a gun. She loses confidence in her ability as a deputy, she loses trust in herself and fellow officers, and she struggles to stay afloat as shift after shift passes. Grace cannot find her rhythm of being a deputy again. And when the Police Chaplain unexpectedly barges into her life, her personal and professional lives are flipped upside down. Grace struggles to find even ground, worrying that the next time she stares a murderer in the face will be the last.

The books is about a female cop, Grace, which I understood going in. I expected some cop work along with a side of romance. While I enjoyed the characters and their little imperfections and the realistic feel of them, I felt like emotions were missing from their actions. The actions, movements and descriptions were there but the feelings and reasons were left off a lot of times making it hard to fully connect and feel for the main characters.
I felt like although it was a cop book, there was too much cop work and details given. I would’ve liked to see it focus more on the actual big case and the relationship that was slowly developing instead of all the mundane day to day work as it took away from the book and slowed the plot to me.
Having a father and husband that work with or close to the local police force for over 30 years, I had issues with some of the ways things were handle as that’s not how I know them to be done or taken care of. That is a completely personal observation that most likely won’t affect most people that read the book though. Plus, all I know is from someone else and all from the same state so likely it could be slightly misconstrued because of that and the way every state/department is run a little differently.
Overall, I loved the two main females and would’ve liked to see more focus on them then the cop work, then again I’m a romantic at heart and love that side more than the cop work as I heard about that on a day to day basis.
Can’t wait to see where the next edition in the series takes us!
~Renee

For By Grace, written by Adrian J. Smith, is a crime procedural featuring Officer Grace Halling, a police officer more likely to stub her toe getting out of bed then not, but who can take on whatever situation her shift presents with calm and “grace”. Featured prominently is also Amya, the precinct’s new chaplain, who initially rubs Grace the wrong way, but eventually forges a strong relationship with her.
First, for the full disclosure. Adrian and I have known each other for a couple years now, and she often beta reads for me. While I was not one of her betas, I did pinch hit on a few chapters for her, so I’ve been very minimally involved in this novel from an early stage. However, I don’t believe that lessens my ability to give it an honest review.
The good: Adrian is great at writing the crime aspects. She obviously has done a lot of research about what it takes to be a law enforcement officer and that shines through clearly. The dialogue is strong and realistic, the grammar is top notch, and the editing is phenomenal. As far as a book being well put together, it doesn’t get much better. There’s clearly been a lot of work into presenting a clean and polished product and that makes reading this a breeze.
The meh: For me, I would have like some more emphasis on the burgeoning and changing relationship between Grace and Amya. It’s there, just lurking beneath the surface for most of the novel, and it’s never featured prominently. I know this isn’t a romance, and I wouldn’t want it to be, but for me personally, I like all my novels with a hefty dose of romance, so I’d have liked to see a little more there. For all you parents: though this book is marketed as adult, there is no reason it’s not appropriate for a teenager. There’s nothing explicit in here, so while it’s a meh for me, it may be a giant plus for you. As an introduction to the LGBT genre for someone not sure if they’ll enjoy a f/f pairing, this is a great way to dip your toes in the proverbial water.
The not so good: My biggest problem with this book is the chapters. Each one is relatively self-contained, and I prefer more flow. A larger, over arching plot. There isn’t as much of that in this as I prefer, with each chapter covering a shift and what happens therein. It’s a very different take and I don’t think I’ve ever read another book with the same setup, but for me, it didn’t work.
And the verdict is: A worthy read. For By Grace has way more good things than bad, and the bad are just my own personal preferences rather than some fatal flaw within the novel. Overall, you won’t be disappointed if you pick this up, and I highly recommend that you do so.
Rating: 4 stars
Sirena 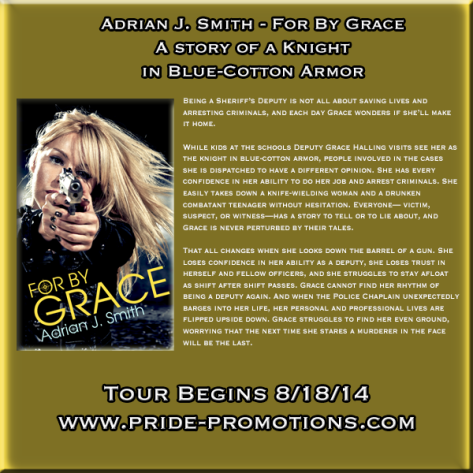 Adrian J. Smith, or “AJ” as she is often called, is a part-time writer with an epic imagination, sharp wit, and kind heart that gets her into a bit of trouble when it comes to taking in all the neighborhood stray cats. Being obsessed with science fiction, Smith often goes off on tangents about the space-time continuum. She is also a part-time lunatic with a secretive past. It’s been rumored that she was once a spy for the government, but anyone who has gotten close enough to know the truth has never lived to tell the tale. When traveling around the world on various classified tasks, Smith requires the following be provided: buffalo jerky, mimosas, and eighty-six pennies. This is all we know about the reclusive woman.

I can. My writing environment, however, changes depending on my mood. I never really always write in one place. I have an office (finally!) and in it I have a card table that serves as my desk. There’s a light, sticky notes, stapler, etc on it. I have a printer to my left and a small shelf to my right. In front of me, I have a cork board. On the wall to my left is a white erase board. I also have a keyboard (electric piano) with sheet music, the rocking chair my husband was rocked in, a few cat trees and a ton of yarn for crocheting. It’s my all around office. =P

I don’t know why her except that maybe she’s closest to someone I would know in real life. I didn’t base her off anyone, but personality wise and what she does, I would probably end up knowing and being friends with someone like her.

I’d do what I do for a living! I’m an ordained minister, and I love that job to death. I wouldn’t trade it in for anything, and I plan on continuing in ministry until I absolutely must retire.

Go into marketing with a plan! I still haven’t quite figured this one out, but I’m at least expanding my horizons on what marketing is out there and how I can utilize it. But marketing isn’t something just to do on the side, it’s something that I need to think about and plan ahead of time. It’s a long learning process for me since I still do a lot of it on the side. I should get better at that. =P

No, honestly. I don’t think there’s anything I would chance (except minor errors I will always and forever find and feel the urge to fix). I like the story. It accomplished exactly what I wanted it to accomplish. I didn’t want a stand police procedural with detectives. Their job is rather boring most of the time as they sit in an office. I wanted a book that would show case patrol officers and what they do, and the things they face on a regular basis. I also wanted a novel that didn’t focus on the romance. That’s been done before, and I’ll admit it, I’m not the number one romantic out there!

Part of it was from my experience working alongside law enforcement as an outside agent, and part was research. Part is just listening and reading stories that happened to cops and perhaps expanding on them a little. Police officers have the best stories some times.

I have a new series I’m working on that’s urban fantasy, and finishing up the Spirit of Grace series. I have one more book to write about Grace, and then it’s on to newer things.

I’ve lived all around the country, so I’m not sure about this one. I just moved a few months ago, so I doubt this new place has any influences on me yet.

Outside of what I write? Yeeesh. I really enjoy reading Native American stories. I plan to write one, but I haven’t yet, so this still counts as an answer! I loved reading Scott O’Dell books growing up, and I certainly still love them.