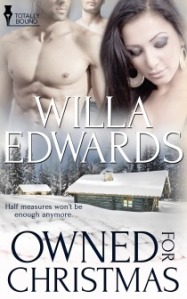 Christmas with her boyfriend’s family seems like a lovely idea—until she finds her previous Dom staying for the holidays too.

Although she had no idea Grant and Daniel were brothers, Grant revives all those needs that Daniel can’t fulfil. But she won’t give up the man who helped mend her broken heart after Grant shattered it—even if she has to bury the submissive part of herself to do it.

A year ago, Grant Farrell left the woman he loved—and the best sub he’s ever controlled—to tend the family ranch after his father’s death. It almost tore his heart out to leave Kate but he had no other choice. He didn’t realise how much it had hurt them both until she shows up at his family’s home on his brother’s arm.

Now more than ever he’s determined to keep her in his life, even if he has to share her to do it. But half measures won’t be enough anymore. He needs either to own her completely, or give her up to Daniel for good.

Can he convince Kate to forgive him for the pain he caused her and the secrets he kept? Or will he lose her to his brother for his past mistakes?

This was an awesome story.  Despite my not entirely liking the dynamic between brothers, I really enjoyed the story.  Grant, Daniel and Kate were a perfect trio.

Kate is a strong, independent women who finds love in Daniel. Daniel is a character who values his woman, knows what he wants and goes after it.  These two together make a sexy team. But, when you throw in Grant, it becomes a combustible situation. Kate and Grant’s dynamic is so different than the dynamic that she has with Daniel.

The domination that Grant has over Kate is overwhelming and passionate.  She doesn’t really know how to react since she had thought that she was going to be OK with burying that desire.  Grant also thought he was surviving without exerting his dominance over Kate – but both realize they need each other to fulfill those desires. But, when Daniel is added to the mix, this trio is explosive, sexy, cowboy yumminess!

Will the brothers be able to overcome their past resentments to move forward?  Will Kate be able to forgive the Dom who broke her? The relationship that ensues is one of hot sex, dominance and trust.

This was an excellent story.  It was a warm holiday read.  The author used very descriptive language so you could visualize the scenes well. The story flowed well.  The author had you loving the relationship between Kate and Daniel.   But then introduced Grant and the story sizzled.
The characters in the story were perfect.   Where Daniel was a very loving, caring and sweet guy, his brother Grant, was the opposite and was a very dominating guy.  Kate was a loving young woman knowing something was missing in her life. The story is about how two sexy cowboys are going to work their way into Kate’s life.  A very quick, excellent read!
Sherry

I’ve wanted to be writer as long as I can remember.  My mother claims that I wanted to be a writer when I was four (but I’m still not sure I knew what a writer did back then).   I completed my first novel at the ripe age of 8 in my grandmother’s dining room using my mother’s typewriter from college.  It consisted of one typed page, four chapters, each a paragraph long.  The story was about a set of alien sisters that landed on earth, had to learn how to make their way home but in the process fall in love with two human boys.  I know, a love story from the very beginning.  I blame Walt Disney.