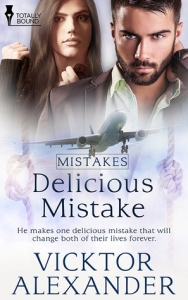 Miguel Rodriguez believes that love makes the strongest of men weak and wants no part of it, but when he meets Julian Canton, he makes one delicious mistake that will change both of their lives forever.

Miguel Rodriguez stood by his friend Xavier’s side when evidence of his affair with another man came out. He also stuck by Xavier when he disappeared from Atlanta and moved to the mountains of Wyoming. But he will not stand by Xavier when he decides to marry his young lover and still run for the Senate. Hopping on a plane to fly to Wyoming, Miguel finds himself meeting Julian Canton, a young man who has no political ambitions and doesn’t even vote, and yet Miguel finds himself fascinated.

Miguel makes the mistake of upgrading Julian’s ticket so they can get to know each other better and somehow finds himself in Riverton, WY, holding Julian’s hand as he says goodbye to his brother. Giving in to his attraction to the young man, Miguel struggles not only with his physical attraction, but his emotional one as well. When he compounds his mistake by inviting Julian along with him to talk to Xavier, he soon finds himself feeling something he has never felt before. Will he join his friend Xavier in listening to his heart or will he walk away?

This book had a good story to it.  This was about being in the right place at the right time and meeting that special someone. It was about coming out and not being afraid of who you are, but finding unexpected happiness and letting yourself go and being free.  The characters struggled with loss and finding themselves by moving forward.

I found that I liked Miguel, even though he hadn’t told anyone he was gay. He was a contradiction of everything he was trying to talk to his friend about, until he met Julian.  Miguel was very arrogant, but caring. I felt sad for Julian for all losses so far in his short life.

I enjoyed reading this lighthearted romance, though I found it extremely short, left me wanting a little more of their story.

Vicktor Alexander “Vic” wrote his first story at the age of 10 about his youngest sister and her destruction of the world…with her breath.  Much to his youngest sister’s dismay the story was a hit and became the first story of a series all dealing with the planets that were destroyed by his siblings and their strange quirks and body odors. Vic now enjoys writing about shifters, humanoids, cowboys, firemen, rent boys, fairies, elves, dancers, doctors, Doms, Subs, and anything else that catches his fancy, all sexy men falling in love with each other and having lots of naughty, dirty, man-on-man sex.  Author of the best-selling series, The Tate Pack, Vic is a huge fan of the “happily-ever-after” ending. But while his characters all ride off into the proverbial sunset, all sexually satisfied and in love, they all bear the scars of fighting for that love, just like in real life. Out and proud, Vic does not believe that love only comes in one form, one race, one gender and that not only is gender fluid, by sexuality as well.  Vic loves to make people laugh and when he’s not writing, or rather, procrastinating in writing, he’s reading, playing the Sims 3, hanging out with his very supportive adopted family, talking to his adopted daughter, whom he affectionately calls “Chipmunk”, seeking the man or men who can handle his crazy, stressful, soap opera-esque life and being distracted from his writing by drooling over pictures of John Barrowman, Scott Hoying, Charlie David and Shemar Moore.