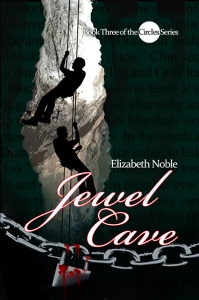 Through ten wonderful years Griff Diamond and Clint Bishop weathered good times and bad together. Lately they haven’t spent as much time together as they’d like, and their physical relationship is suffering. Then Clint loses his job at the steel mill. Instead of worrying, he sees it as an opportunity to lean on his steady partner, start his writing career, and rekindle the passion they’ve lost.

But a friendly relationship with another author turns to obsession, putting Clint’s life in danger. Taken against his will to the Jewel Cave system in South Dakota, Clint must rely on the skills he’s learned from Griff to survive.

Fearing the worst, Griff tracks Clint across the country. As a US Marshall, Griff’s always been the man who keeps everyone safe, but he doesn’t know how he and Clint will survive this.

WHAT YOU THOUGHT OF THE BOOK 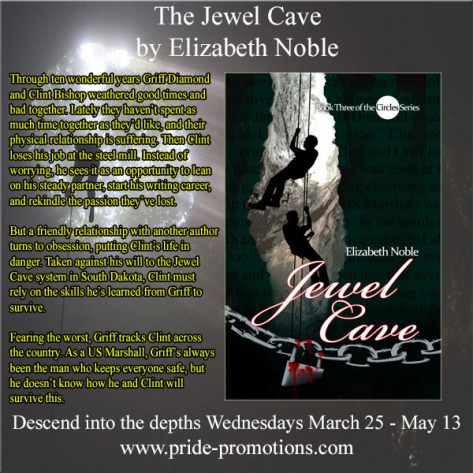 It was time to back away from Dylan, what had been a friendship had definitely shifted to territory uncomfortable to Clint. He didn’t want to hurt Dylan’s feelings. He’d tried sending a few emails telling Dylan some of his pictures weren’t appreciated, but it did no good. The guy was either dense or stubborn.

Unlike some of his other friends, Clint knew nothing about Dylan’s family or the people who lived near him. As far as Clint could tell, Dylan was alone in the world, and his sudden attachment to Clint was starting to feel creepy. So, lately, Clint had been taking longer and longer to answer emails and tried to keep subjects of conversation as neutral as possible or focused on writing projects.

The pictures Clint deleted. Griff would flip if he ever knew about those photos, not that Clint would blame him in the least. He would have loved to share some of his other concerns about Dylan’s wellbeing with Griff, but Clint knew the man would turn Dylan into one of America’s Most Wanted in under a minute.

Such was the hazard of sharing his life with a US Deputy Marshal.

He’d made a vow to himself long ago he’d never use Griff’s job or badge unless there was a solid, valid reason. Someone he’d known for a few years all of a sudden annoying him online was not solid or valid in Clint’s mind. Clint kept reminding himself Dylan was lonely and had no family. He was probably merely one of those people who didn’t get the concept of boundaries. That didn’t make him a criminal, just socially awkward.

Clint nearly jumped out of his skin when someone’s strong arm snaked around his waist and pulled him back against a firm body. Warm breath blew in his ear along with the words, “You left the door unlocked again. I could be the neighborhood whack job here to bludgeon you to death after defiling you.”

“You scared the crap out of me!” Clint yelped, trying to squirm away, but it was useless. “You’re the guy on this street with all the big guns.” Behind him Griff chuckled and used one finger to move Clint’s hair away from his neck. He pressed a soft kiss to the spot. Clint glared down at the dogs. “And you two! You need watchdog lessons.”

Griff gave a little jerk forward with his hips and snickered. “And those big guns are all yours.” He let go of Clint, turned him, and shook him by the shoulders for a second. “Lock the goddamn doors. Even if someone smashes through the storm door, you’ll at least hear them.” He raised his eyebrows and leaned away from Clint, letting him go. “For me. Please. ’Cause the only defiling that goes on in this house is done by me.”

Elizabeth Noble started telling stories before she actually knew how to write, and her family was very happy when she learned to put words on a page. Those words turned into fan fiction that turned into a genuine love of M/M romance fiction. Being able to share her works with Dreamspinner is really a dream come true. She has a real love for a good mystery complete with murder and twisty plots as well as all things sci-fi, futuristic, and supernatural and a bit of an unnatural interest in a super-volcano in Wyoming. Elizabeth has three grown children and is now happily owned by an adorable mixed breed canine princess named Rosie, and two cats, Murphy and Yeti. She lives in her native northeast Ohio, the perfect place for gardening, winter and summer sports (go Tribe!). When she’s not writing she’s working as a veterinary nurse, so don’t be surprised to see her men with a pet or three who are a very big part of their lives. Two of Elizabeth’s books have received Honorable Mentions in the Rainbow Awards.